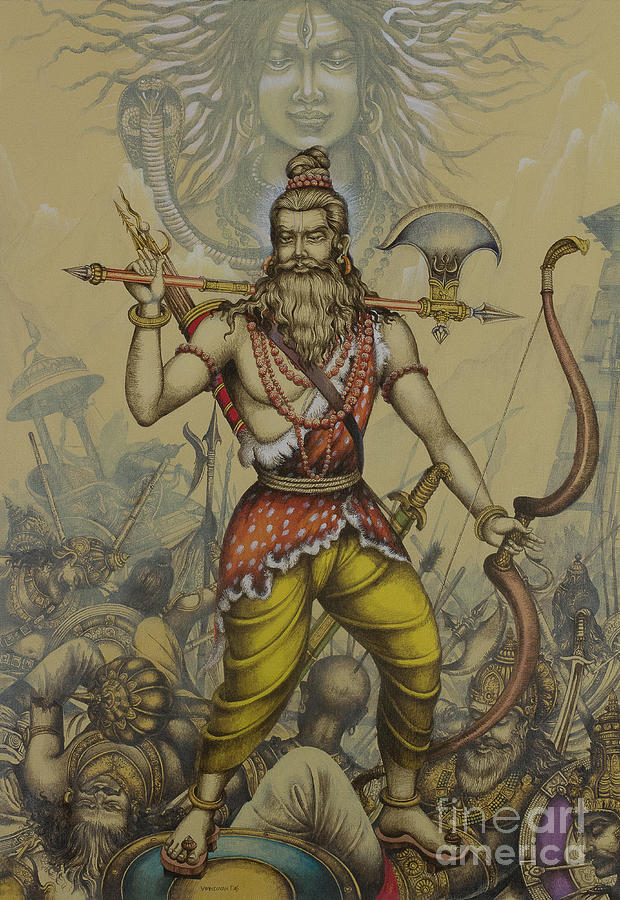 This is a series of paintings of 10 avataras of Lord Vishnu for Mseum of Sacred art, Belgium.

Parashurama is the sixth avatar of Vishnu(Dashavatar). He is the son of Renuka and Jamadagni rishi. He lived during the last Tretha and Dvapara Yugas.

He is one of the immortals- chiranjivi. Parashurama received his famous axe after undertaking terrible tapasya to please Shiva, who in turn taught him martial arts.

Parashurama is most known for ridding the world of kshatriyas twenty-one times over after the mighty king Kartavirya Arjuna who killed father Jamadagni.

Parashurama conducted hundreds of Ashvamedhas and gave away the entire earth he conquered as alms to sage Kashyapa.
He plays important roles in the Mahabharata and Ramayana
Bhishma, Drona and Karna was his desciples
Parashurama and Indrajit (Ravana's son) are believed to be the only humans who ever possessed the three ultimate weapons: Brahmandastra, Vaishnavastra and Pashupatastra.
Parashurama was a disciple of Shiva and learned the scriptures and the arts of warfare from Shiva.
He then acquired celestial weapons from Shiva and the other gods on Shiva's instructions.
Shiva personally trained Parashurama for decades in the art of warfare.
The Bhargavastra was his personal celestial weapon and vijaya was his personal bow which was gifted by Shiva.
This is why I painted Shiva on background of the painting
Parashurama also fought back the advancing seas to save the lands of Konkan and Kerala.
All lands started from Kerala, Karnataka, Goa and Maharashtra called after Parashurama as Parashurama kshetra.

Congratulations on your recent sale!

Congratulations on your sale of this wonderful artwork! Fl