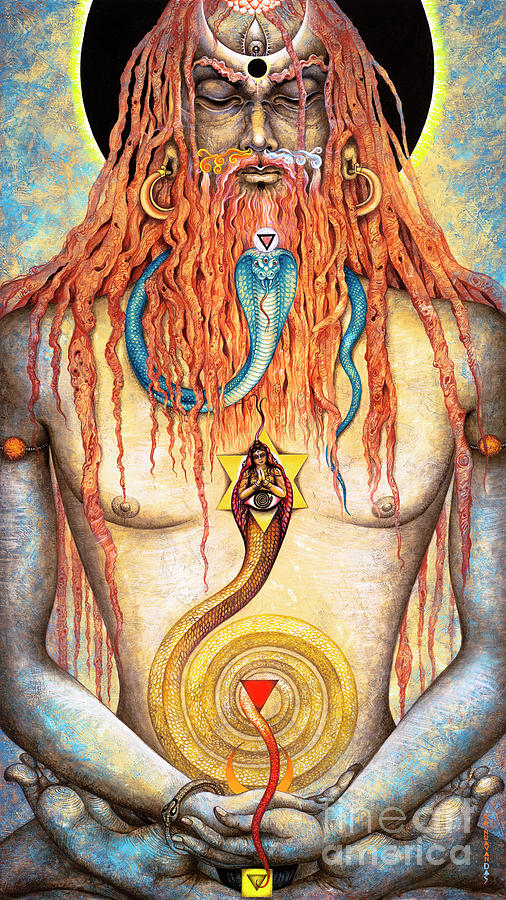 This original painting is currently for sale.   At the present time, originals are not offered for sale through the Vrindavan Das - Website secure checkout system.   Please contact the artist directly to inquire about purchasing this original.

The word Kutastha has several meanings in Sanskrit and the main ones are: the supreme soul, the immovable, the omnipresent, the spirit, and so on.

Yogiraj Sri Yukteshwar Giri Guru of Yogananda said that some pandit scholars misinterpreted Bhagavad Gita verse where it describes meditation at the base of the nose "between the eye brows" and not on the tip of the nose.

A shining light circle and a black circle appears inside. This is what the yogi meditates on. Kutastha is described in the Yoga Shastras and the Bhagavad Gita in Chapter 15 of Sloka 16.

There are only two Purushas in this world: mortal and eternal. Everything in this
creations is perishable, and only Kutastha is considered eternal.

As a result of meditation on Kutastha in kriya practices , the yogi sees the true essence - the atma. Then comes the vision that there is only Kutastha and everything emanates from it.

This painting is not a detailed chart of chakras. I defined chakras as the main geometric symbols.

Manipura is an inverted triangle, annahata is two triangles, one is directed downwards and the other upwards, etc. and so on.

This is just a picture of a Yogi and Kutastha between the eyebrows. Kundalini shakti begins its journey in Muladhara and further moves towards the Agya chakra to unite with the Atman-Shiva

Congratulations on your recent sale of an amazing work!