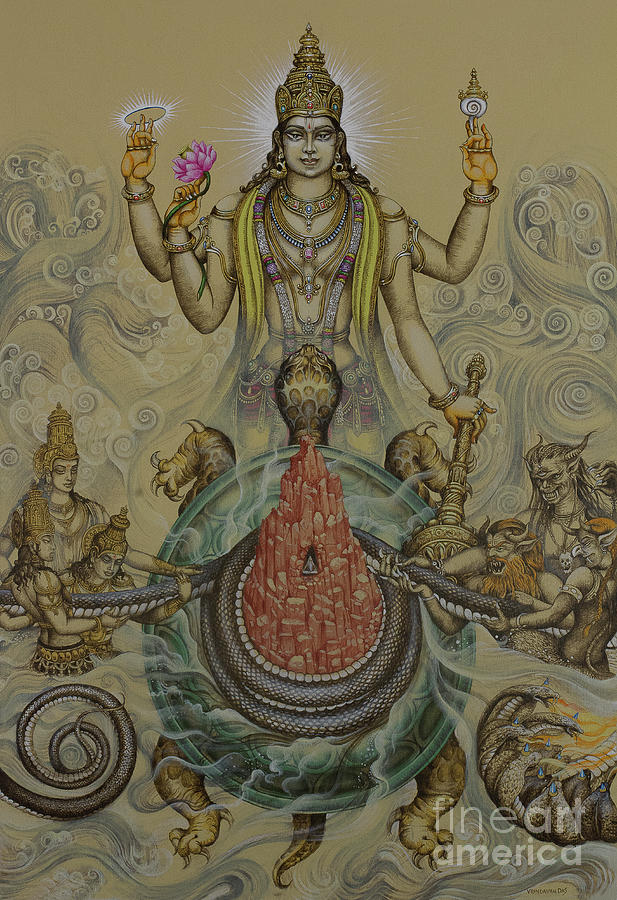 This is the series of paintings of 10 avataras of Lord Vishnu for Museum of Sacred art, Belgium

Kurma is the second Avatar of Vishnu.

Like Matsya, this incarnation also appeared in Satya Yuga.

Ones Rishi Durvasa had given a garland to Indra, the king of Gods. Indra placed the garland around his elephant, but the animal trampled it, insulting the sage.

Durvasa then cursed the gods to lose their immortality, strength, and divine powers. After losing the kingdom of heaven, they approached Vishnu for help.

Vishnu advised that they had to drink the nectar of immortality to regain their glory.

The Devas were not strong enough to churn on their own, and declared peace with their foes, the Asuras, to enlist their help.

Finally, Mount Mandara churned, but the force was so great the mountain began to sink into the ocean of milk. Taking the form of the turtle Kurma, Vishnu bore the mountain on his back as they churned the waters. Fourteen precious things arose from the turbulent ocean, culminating with Dhanvantari, the physician of the gods, who brought with him the nectar of immortality.

The Asuras immediately took the nectar, and quarreled amongst themselves. Vishnu then manifested himself as the beautiful Mohini and tricked the Asuras to retrieve the potion, which he then distributed to the Devas. Though the Asuras realized the trick, it was too late—the Devas had regained their powers, and were then able to defeat their foes.