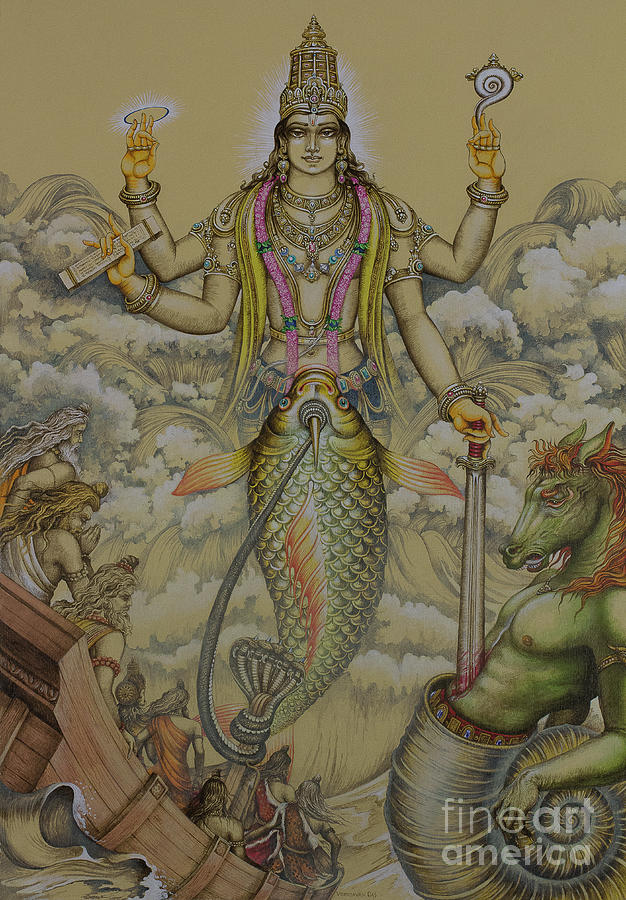 Matsya (Fish) Avatar is the first among the ten incarnations of Lord Vishnu.

The story about Matsya narrated in the Bhagavata Purana, Vishnu Purana.
As per the story, Lord Mahavishnu incarnated as Matsya to ensure the continuity of life on the earth following the great floods and also to rescue the Vedas and sacred texts from the demon Hayagriva.
Demon called Hayagriva (with the face of a horse , please do not mistake for Hayagriva Vishnu avatar and Hayagriva from Tibetan Buddhism) who stole the Vedas from Brahma, the creator and had disappeared into the oceans.
During those times, there was a highly virtuous and pious king named Satryavrata or Vaivasvata Manu who ruled over the southern part of the Bharatvarsha.
One day, the king went to Krithamala River to do his morning prayers.
When he took some water from the river in his cupped palms, he found a tiny fish in it.
When he wanted to drop the fish in the waters, it requested him to give shelter for fear of being eaten away by bigger fishes in the river. The King obliged and carried the fish to his palace and dropped it in a vessel.
With the fish growing in size rapidly, Vaivasvata Manu had to change the container to bigger ones, finally when none of the containers was enough to contain the fish, it was eventually transferred to a pond, then to a lake , then to river Ganges and then finally to the ocean.
The fish was growing even bigger in the ocean and once it thanked Vaivasvata Manu for giving shelter till then and assured the king that it would appear back after a while to rescue the king from the great floods.Meanwhile, the fish instructed the king to collect the best of seeds from the flora and the best of representatives from fauna. It also advised that a huge ship be built and kept in ready condition.The great floods started swallowing the earth. The King had by then gathered all the collected seeds and representatives in the huge ship. The huge fish Matsya Avatar appeared and brought with it the huge snake Vasuki.The ship with Manu and his collections aboard was tied to the horn of the fish with the snake Vasuki. The fish swam over the floods pulling the ship to safety reaching the top of the Mighty Himalayas. All through the voyage, the Fish discoursed the King on the entire gamut of Sacred literature.Once the great floods subsided, the demon Hayagriva was exposed. Matsya killed him and rescued the Vedas handing them over once again to Brahma. All the seeds gathered in the ship were thrown on the earth. All the representatives of the different animal species started procreating once again.