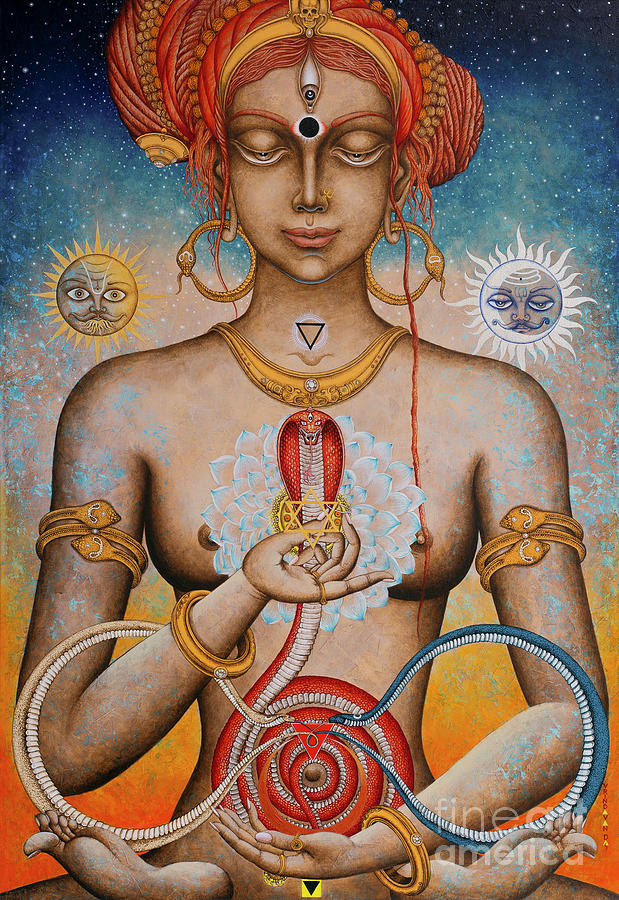 This piece has been already sold.   Please feel free to contact the artist directly regarding this or other pieces.

Yogini Shakti (not to be confused with woman, who practices yoga)
Yogini is an aspect of the Great Mother Tripura. Includes saptamatric or ashtamatric.
There are many of them.
Iconography varies.
Many Yoginis have human female bodies, but the heads could represent animalistic life forms, for example, a Buffalo, lioness, or antipope.
The Yoginis represent different forms of Shakti, they are companions of Shri Adi Shakti, the Great Mother.
Factually, they are parts of Her.
They dwell in Shakti pithas, in the forests of the temples of Nature. Some of them are worshipped as the elements of Nature.
Some of the Yoginis inhabit the ravines of the mountains or some deserted places.
Their nature can be completely different in character and temper.
There are terrifying and wrathful, even carnivorous yoginis.
There are very peaceful and sustained in the spirit of deep devotion to the Great Mother.
Since ancient times, teachers have given their students instruction in practice where, in the end, the adept would receive a vision of Yogini and would obtain knowledge from her, together with Siddhi, as a mystical perfection.
Yoginis are the keepers of the secret practices of yoga and tantra.
In fact, they personify the siddhi.
Yoginis inhabit different levels of existence.
Some of the Yoginis live in cremation areas.
When the asuras begin to disturb the universe and the Great Mother Tripura descends onto the battlefield between gods and demons, then different kinds of Yogini also come with Her, helping Mother to overpower the demons.
Often the Yoginis are depicted carrying different types of weapons such as tridents and vajras, bows and arrows, skipper and goad.
Many Yoginis possess great knowledge of liberation.
But getting this knowledge from them is not easy since many of the Yoginis also have an angry temper.
The knowledge they carry is not just a bookish philosophy, but in a sense, it is the realization itself, which destroys both favorable karmas and unfavorable ones, like duality.
Some tribes who lived far away in the middle of nowhere, in the distant mountains, or in the jungles, also worshiped the Yoginis.
Their rituals are similar to shamanic rites.
Yoginis also carry siddhi in 10 karmas, starting from shanti karma and stambana further on to viskarana and right up to Maran karma.
In Buddhism, Yoginis are worshiped as Dakinis.
In truth, Yoginis are different types of faces of Tripura itself.
The entire manifest and subtle world is the form of the movement of shakti-Prana. In yogic terms we can name them as nadi-channels in the body.
History describes many cases when the Yoginis helped the sadhaks or yogins during difficult moments of their lives.
It also happened when the Yoginis helped the Kings to save their nations and kingdoms from the natural catastrophes or invasions of the enemy.
The picture presents a collective aspect.
This is not a table on the chakras, but a reflection of the state.