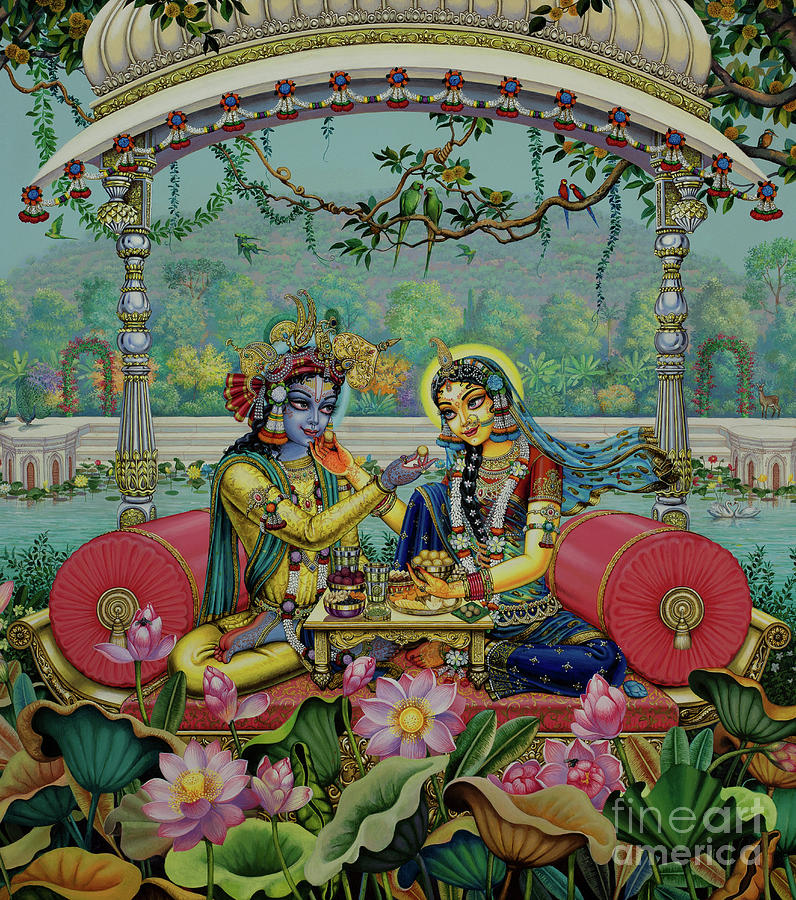 Bhojan lila describes Sri Krishna and Srimati Radhika enjoying prasadam in one of the kunjas of Vrajabhumi.
The lila in this painting takes place near the Govardhana Mountain in the sacred tirtha of Radha Kunda. There are many different pavilions around Kunda, where Sri Krishna and Srimati Radharani, surrounded by their friends, spend their pastimes together.
On the north side of Kunda the eight-petal kunja of Lalita Sakhi. From there a moonstone bridge connects the northern ghat of Radha Kunda with sixteen petal kunja of Ananga manjari, located right in the middle of Radha kunda (Svananda Sukhada kunja).
Here, surrounded by different types of lotuses, this glorious kunja of Sri Ananga Manjari shines with precious gemstones and here she serves Divine couple. Sakhis and Manjari play pleasant musical ragas on various instruments and the wind carries the sweet aroma of flowers.
Sri Krishna and Sri Radha are depicted in the middle of this composition, enjoying different types of dishes and sweets and refreshments. Lovingly feeding each other with sweets, they are looking into each other’s eyes.
From Radha’s side there is Ananga Manjari herself, who stands nearby, holding a plate of paan. Nearby, below, is Rupa manjari, who plays tampur; behind her in a sari with peacock feather patterns, Lalita Sakhi waves a golden chamara.
From Krishna’s side there is Tulasi manjari, who waves with golden chamara, and next to her Vishakha Sakhi with tray -refreshing drinks.
They are surrounded by many singing birds and peacocks, black bumblebees fly above lotuses, collecting honey.
The southern ghat of Radha Kunda is on the background, with Govardhana Mountain on the distant horizon. There is a deer on the lake front, who came to drink water.
Golden, blue and red lotuses grow on the lake and swans are swimming gracefully; it is a hot afternoon and the divine couple, after taking a bath in the lake, took refuge in the shade of the arbor from moonstone and crystals with gold. Kadamba trees are hosting many parrots and various songbirds.
Earlier I painted this lila several times, but it was taking place on the bank of the Yamuna river, during evening time, after the Rasa dance in Vrindavan.
This time I portrayed Thakurji and Thakurani on the banks of Sri Radha Kunda.
My Guru , Sri Anant Das Babaji Maharaja, lived and performed bhajan here for many years .
This darshan became possible because of his comments on various texts and holy books and extended communication with him and other rasika bhaktas of Vraja.
Leela is difficult to convey in words or colors; this darshan appeard on the canvas of heart.
The colors are different there and the music is full of life. And yet the poet described the musician, who had performed the music and the artist painted a picture of it.
Perhaps, I would not be able to express original canvas of reality in full , but I tried to do it by the grace of the Guru and Deities.
Jay Sri Gurudeva!
Jay Sri Shyamsundar!
Jay Srimati Radharani!
Vrajabhumi Ki Jay